Here at the farm, we’re in the midst of mad preparations for this weekend’s 12th Annual Great Tomato Celebration, which runs May 19th through 21st, from 9 a.m. to 5 p.m. daily, rain or shine. The weather is set to be mostly lovely (which, we have to say, always improves everyone’s mood a bit), and we’re raring to go.

On Thursday, staff members will set out tables in the open field adjacent to the store. As the sun rises Friday morning, our tractors will be buzzing back and forth to the greenhouses and warehouse ferrying flats of Tomato seedlings, vegetable starts, herbs, growing supplies, container pots, and anything else we think gardeners might need. Tomato aficionados, some from as far away as Vermont and Massachusetts, tend to arrive early, and at the stroke of 9 a.m., the shopping begins! Gardeners who know just what they want can be seen bolting up the hill, sometimes running to claim their favorites. Their lists in hand, they work the aisles, filling their wagons. Others adopt a more leisurely pace, scanning the signs that describe each Tomato variety and asking questions of staff members, who are always happy to answer and to steer shoppers to favorite selections.

This year, we’re pleased to be offering more than 130 varieties of Tomatoes, including highly coveted heirlooms and bestselling modern hybrids (all non-GMO), and everything else you may want for this season’s kitchen garden including savory herbs and veggie plants.

On Friday, we’re thrilled to be welcoming nationally recognized Tomato expert Craig LeHoullier, author of the award-winning book Epic Tomatoes. He’ll give two free talks on May 19th only. (For a few excerpts from his terrific book, read below.) For times and more details, click here.

Also on tap to offer Tomato-growing tips and answer questions is White Flower Farm’s Nursery Manager Barb Pierson, who will give two talks on Saturday and also be available each day to answer questions. Chef Charlene Goodman Dutka, owner of Ciesco Catering in Torrington, presents Grow It, Cook It, Eat It, a live cooking demonstration that focuses on Tomatoes on Saturday afternoon. For times and a complete schedule of events, click here.

If you’re hungry after rounding up what you need for your kitchen garden, Ciesco Catering’s truck will be selling delicious, made-to-order food.

See you at the celebration! 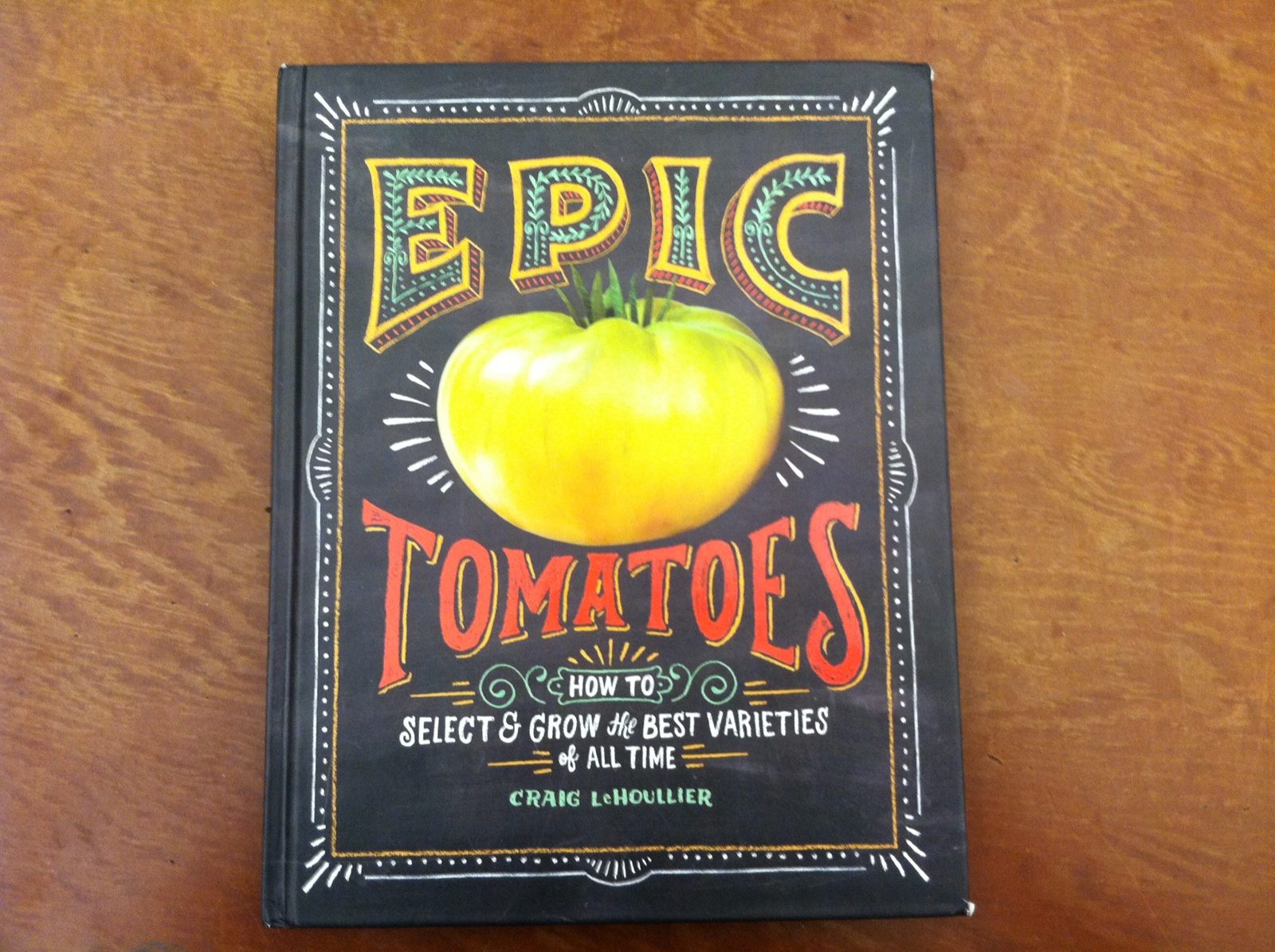 While you’re shopping, consider picking up a copy of Craig LeHoullier’s Epic Tomatoes. This splendid book is stuffed with all sorts of facts and information about Tomatoes – from their early history in this country, to definitions of the different types, to profiles of individual varieties, to tips for planting, growing, staking and harvesting. You can read this book from cover to cover, or keep it around to dive into now and again. It’s a delightful read, and a wonderful resource for those of us who grow and love to eat Tomatoes.

Here’s a somewhat condensed version of LeHoullier’s account of the early history of Tomatoes in America:

“The Mayans and Mesoamerican people domesticated the tomato plant and first used it in cooking . . . By the early nineteenth century, tomatoes were present in many towns across America, though it appears most people didn’t eat them . . . Most people had no idea how popular the tomato was becoming in Europe . . . [and] The tomato had a reputation for being poisonous . . . The most famous early American tomato story is the daring public tomato consumption – perhaps – by Robert Gibbon Johnson in Salem, New Jersey, reported to have occurred in 1820. . . . Hundreds of onlookers reportedly traveled from far and wide to witness this remarkable event . . . Johnson bit into a tomato, some onlookers fainted, and, with Johnson suffering no ill effects, the tomato industry in America began.” 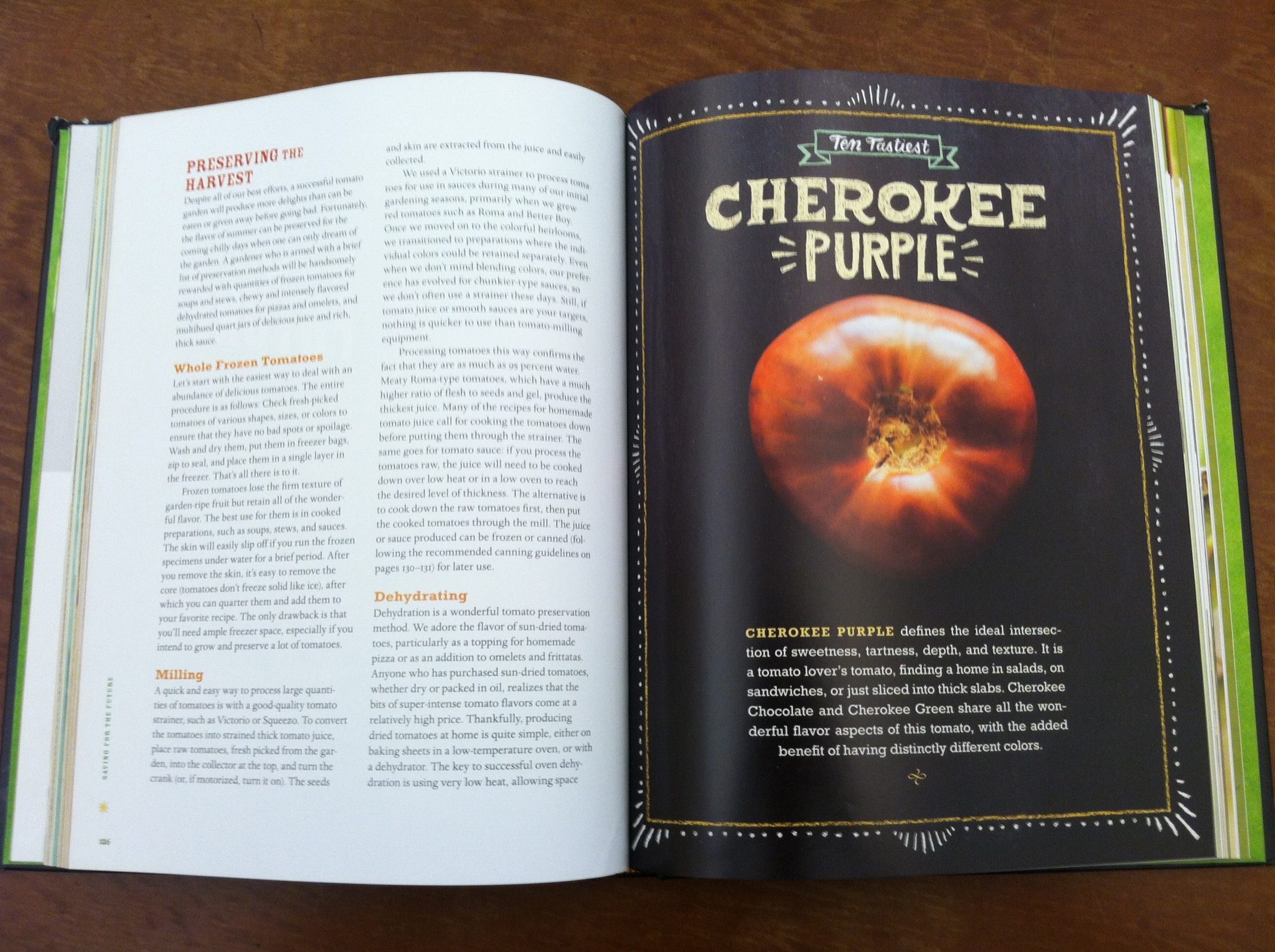 At the farm, we’re often asked to define hybrid, heirloom, open-pollinated, determinate and indeterminate Tomatoes. Here are LeHoullier’s definitions, just in time to help with your shopping:

“A hybrid tomato is grown from seed collected from a fruit that developed from a process known as crossing. Most simply described, pollen from one parent is directly applied to the pistil of another parent. Prior to the cross, the anther cone (the pollen-producing part) is removed from the receiving parent so that the flower doesn’t self-pollinate as it typically would.”

“An heirloom is an open-pollinated variety that has history and value embedded within its story.”

“This class of tomatoes is by far the most common, and its members grow upward and outward continually until killed by frost or disease. Indeterminate tomatoes have a central main stem from which side shoots, or suckers, grow at a 45-degree angle outward from the attachment point of the leaf stems. In turn, each sucker of side shoot acts as an additional main stem and produces its own side shoots. The central stem of an indeterminate tomato, if vertically staked and tied, will easily exceed 10 feet by the end of the growing season. Flowering clusters appear at varying intervals along the main stem and side shoots, ensuring continual fruit potential until the plant dies: this allows for continual and extended harvest throughout the growing season. Another important characteristic of indeterminate varieties is the relatively high ratio of foliage to fruit, and all of that added photosynthesis means a significantly higher flavor potential when compared with determinate varieties.”

In our part of the country, the high and low temperatures of spring are beginning to even out, and the danger of frost will soon be past. That’s when we pot up collections of annuals (and sometimes a few perennials) to decorate our porches and patios. Each spring, our staff members have fun creating new plant combinations. To help you create yours, here are a few tips: 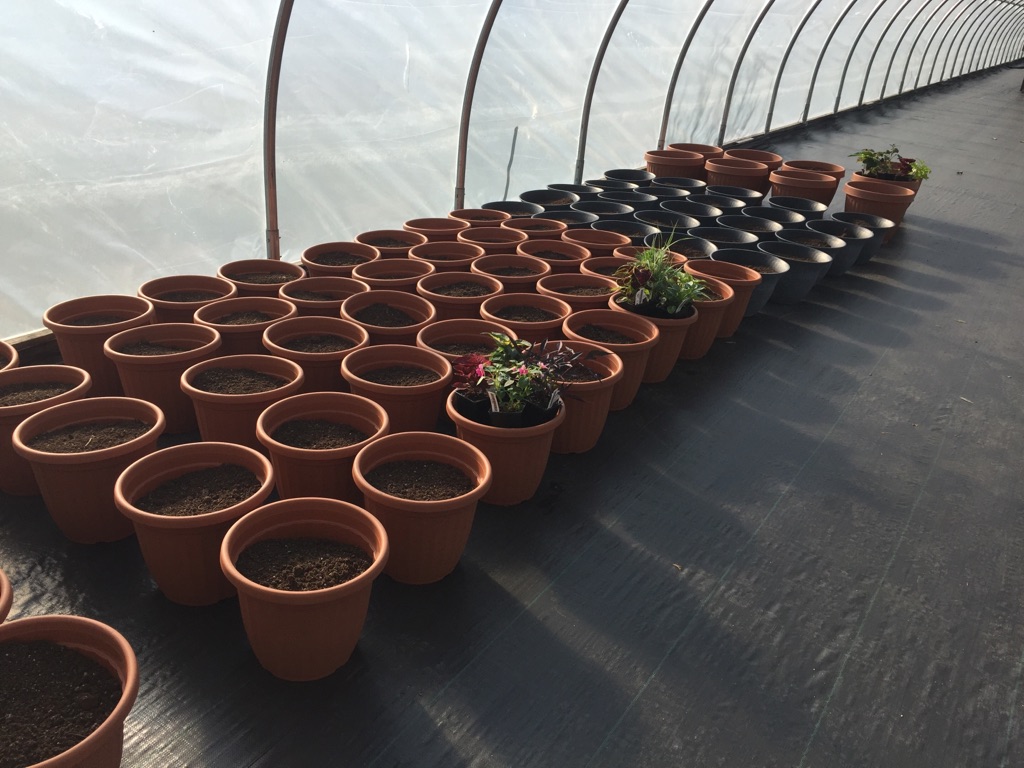 Start by selecting container pots. The variety is limitless, which is both a good and bad thing. The advantage is you have lots of choices – terra cotta, glazed, cast iron, plastic, footed, self-watering, etc. ­– but choosing too many pots in too many colors or styles can create a look fails to unify and isn’t very appealing. As a general rule, you’ll create a sense of visual harmony by choosing a grouping of pots that goes well together even before you add the plants. Then, as you fill them with annuals and perennials, it may look best to pot the same or similar plants in a variety of pots, or pot a variety of plants in the same or similar pots. When in doubt, keep it simple. Less can be more.

Remember to choose pots with at least one drainage hole, says our nursery manager Barb Pierson. If a pot has no drainage hole, drill one. If that’s not possible, fill the bottom of the pot with gravel, river rocks, or Styrofoam peanuts to create a space for drainage.

Choose the right size pot for your plantings: Barb’s rule of thumb is that 3 plants generally need a 12” opening, and 5 plants require a 16–18” opening. 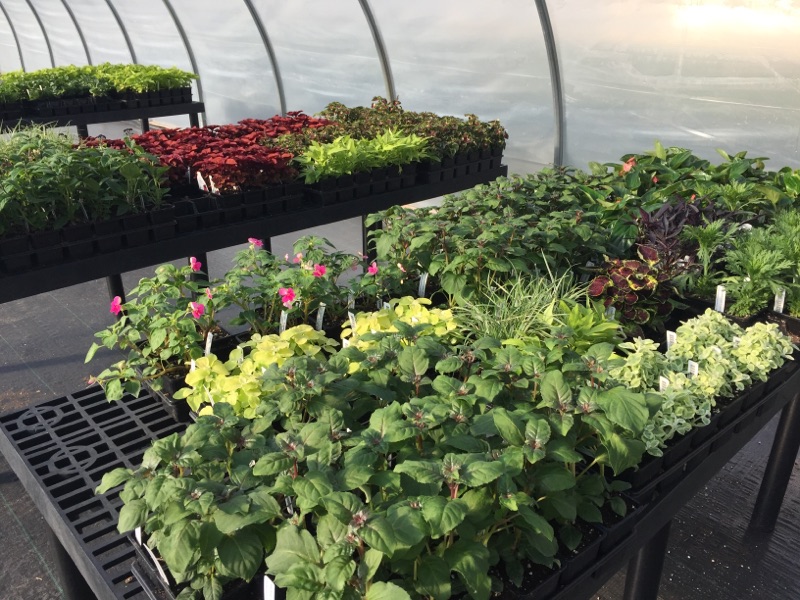 Will your pots be in blazing sun all day? No problem! Choose zinnias, lantanas, salvias, and other heat lovers. Part-shade is very forgiving for most varieties. Are you designing pots for shade? Look for impatiens, fuchsias, caladiums, some varieties of coleus, and some types of begonias.

To create a pleasing combination, play with plant groupings until you get something you like. Here at the farm, our staff members do this in the greenhouses where the annuals are grown. Customers are invited to “play with plants” at our Annual Container Workshops. Another way to experiment with various combos is to pull up images on your computer screen and create a collage. Or, collage the old-fashioned way by cutting out catalog photos and creating groupings of images until you’re satisfied with what you see.

For best results, most patio pot combos should contain 3 types of plants: a thriller (which will be the tallest variety in the combo), a spiller (to cascade over the sides), and a filler (to fill in around the middle). Larger combos tend to have multiple spillers and fillers, but the thriller is generally a single, tall plant such as a grass, elephant’s ears (colocascia), caladium, upright coleus, begonia or fuchsia, or a vine such as a low-growing clematis on a tuteur.

As you’re working, pay attention to colors and textures. Are you using hot colors (red, yellow, orange, and lime), cool ones (blues, lavenders, whites and grays), or pastels (soft pinks, soft yellows, and baby blues)? Do you have a range of blossom forms and foliage types?

To begin your potting, fill your container with planting mix. Barb recommends a mix of ¾ high quality potting mix combined with ¼ compost. (The mix is also great for raised beds.) Water the mixture thoroughly until it is evenly moist but not soaking.

Now position your plants: Before you take them out of the pots they came in, set them atop the planting mix and arrange them in a way that will promote best growth and work best for your site. (If the pot is to be set against a wall or doorway, the “thriller,” or tall plant, is best positioned at the back-center area of the pot. If the pot will be viewed from all sides, the thriller belongs in the middle.) Once you’ve settled on an arrangement, plant your annuals in the container pot. Be sure to fill in with soil around them. (You can use the tip of a trowel or even a large spoon to add more potting mix where it’s needed.) Water again to dampen the soil that’s been added, and let the combo settle.

Over the course of the season, check your pots for moisture daily and water as needed. Larger pots need less water. (In dry summers, container pots may need to be watered daily.) How do you know when your container pots need water? Look for the soil to shrink a bit from the sides of the pot, Barb says. When that happens, it’s time to water. You can also test by sticking your finger in the soil mix. It it’s dry an inch or so down, the plants need a drink.

Feed your plants. Annuals give their all in a single season, and they appreciate a bit of food to keep their blossom and foliage shows going. Barb recommends using a blossom-boosting fertilizer such as our All-Bloom. It makes all the difference, she says.

As the plants grow, trim back varieties that are more aggressive than others. Some varieties of coleus, and trailing plants including ipomoea (potato vine) and helichrysum are vigorous growers. Don’t be afraid to get out the scissors for some judicious pruning. Pinching back plants including impatiens and coleus also helps encourage branching so you get bushier plants.

Not Just for the Patio

Colorful container pots are a joy to behold all season long, and they’re not just for the patio. Pots also can be sited in garden beds and mixed borders, and in front of hedges and walls. A container pot full of colorful blossoms makes a lovely focal point when silhouetted against a green hedge or sited at the end of a path.

If we can help with your combinations, you know where to find us.