At a time of year when loud, colorful fireworks are happening all over the gardens as much as across patriotic night skies, it’s fair to wonder about the attraction of a single garden dedicated to white-flowering plants. After so many showy Peonies and Tall Bearded Iris, and now Roses galore, why focus on a subtle grouping of paler flowers? Here at White Flower Farm, it comes as no surprise that white flowers have an important story to tell. There is no better place to illustrate this than our White Garden.

The White Garden has been a feature at the farm since the 1940s, when nursery founders William Harris and Jane Grant created a 12-foot by 80-foot perennial border in front of a stone terrace and began filling it with nothing but white flowers. Inspired by the British moon garden, they considered the display to be the epitome of horticultural sophistication. It was so prominent in their minds, in fact, that their first idea for a nursery was to showcase only white-flowering perennials and shrubs — an idea that “lasted about a minute,” they later admitted. The simple yet sophisticated White Garden is nonetheless memorialized in the nursery’s name. 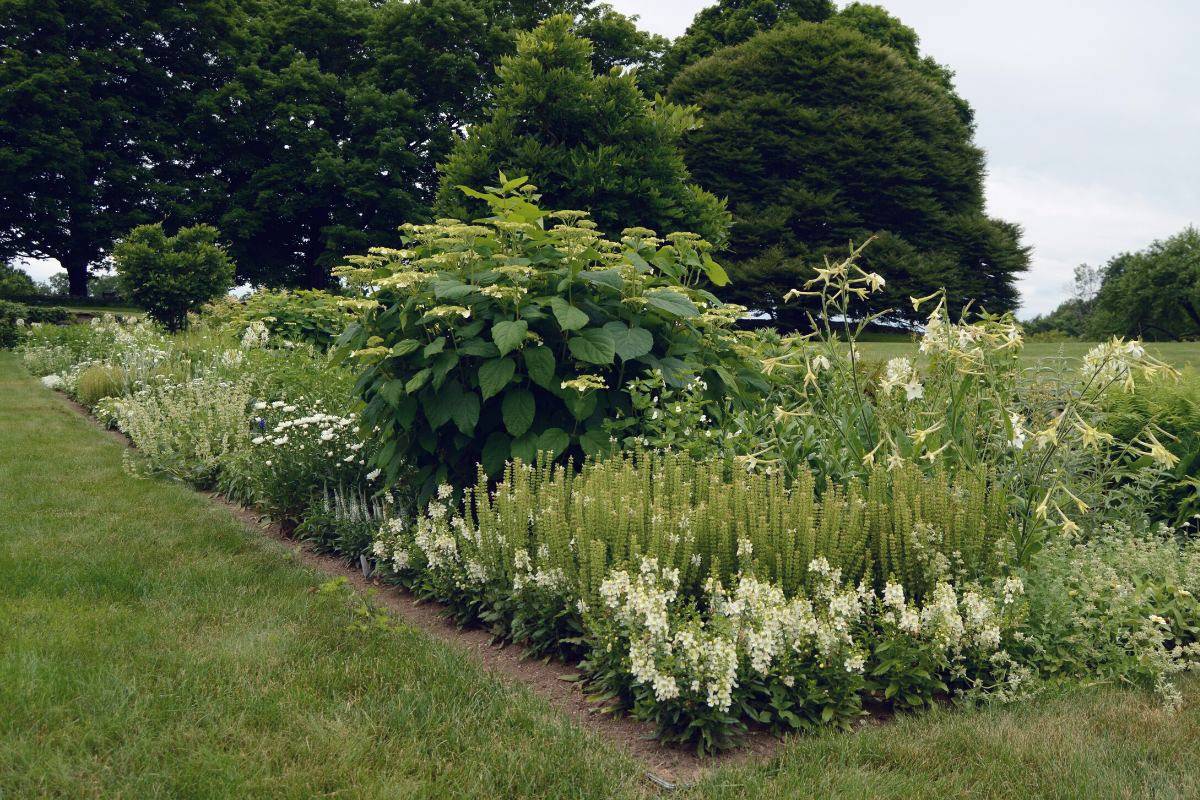 As you approach the White Garden, the general impression of whites and greens invites further acquaintance. If you look more intently, individual plants begin to stand out for characteristics other than color. It is line, shape, form, texture, and value (light and dark) that begin to set them apart. At the front of the border, dense spikes of Summer Snapdragon (Angelonia angustifolia Archangel™ White) create a well-defined corner. Green stalks of Salvia (S. nemorosa ‘White Profusion’), having dropped most of their snowy flowers, add further linear interest, as do the icicle-like racemes of Speedwell (Veronica ‘White Wands’). Set midway into the border, a stout specimen of Smooth Hydrangea (H. arborescens ‘Haas’ Halo’) punctuates the pools of perennials at its feet, encouraging visitors to pause and enjoy this first section of the garden. 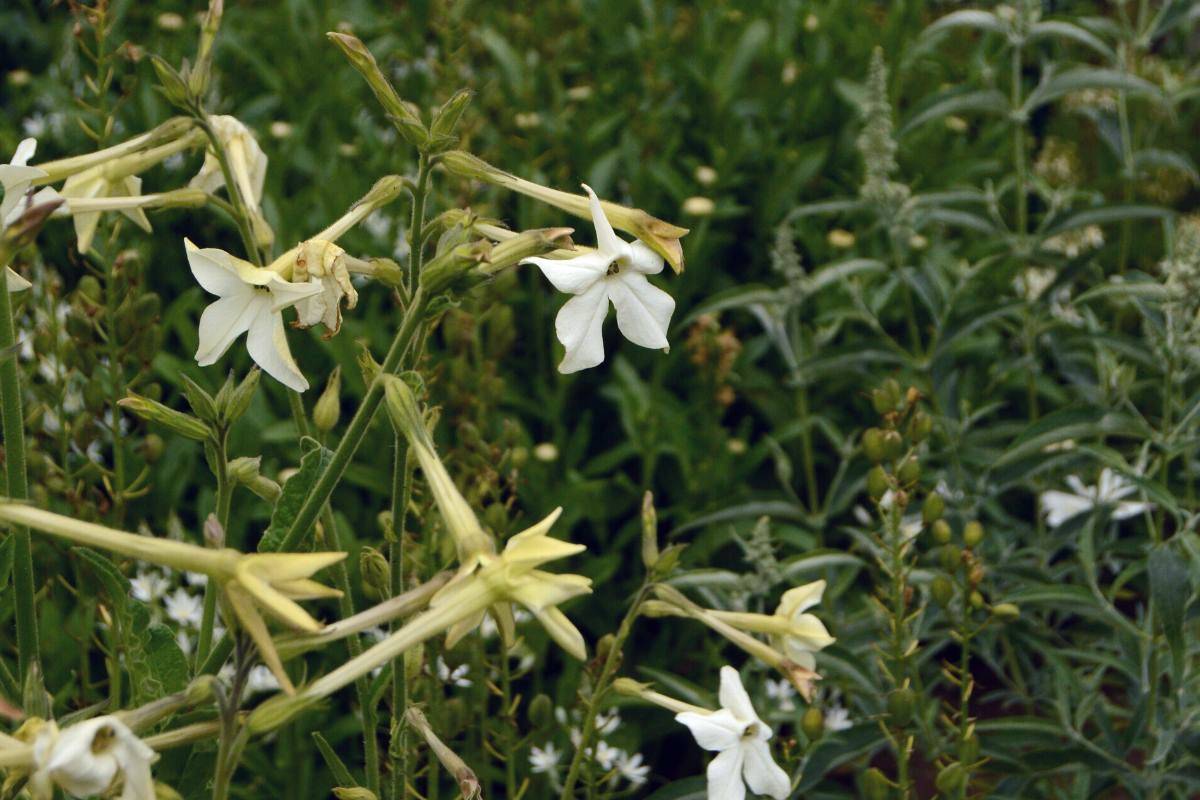 If you linger, you notice the starlike blossoms of Flowering Tobacco (Nicotiana alata) borne on tall, wiry stalks, hovering over the other plants like a small meteor shower. 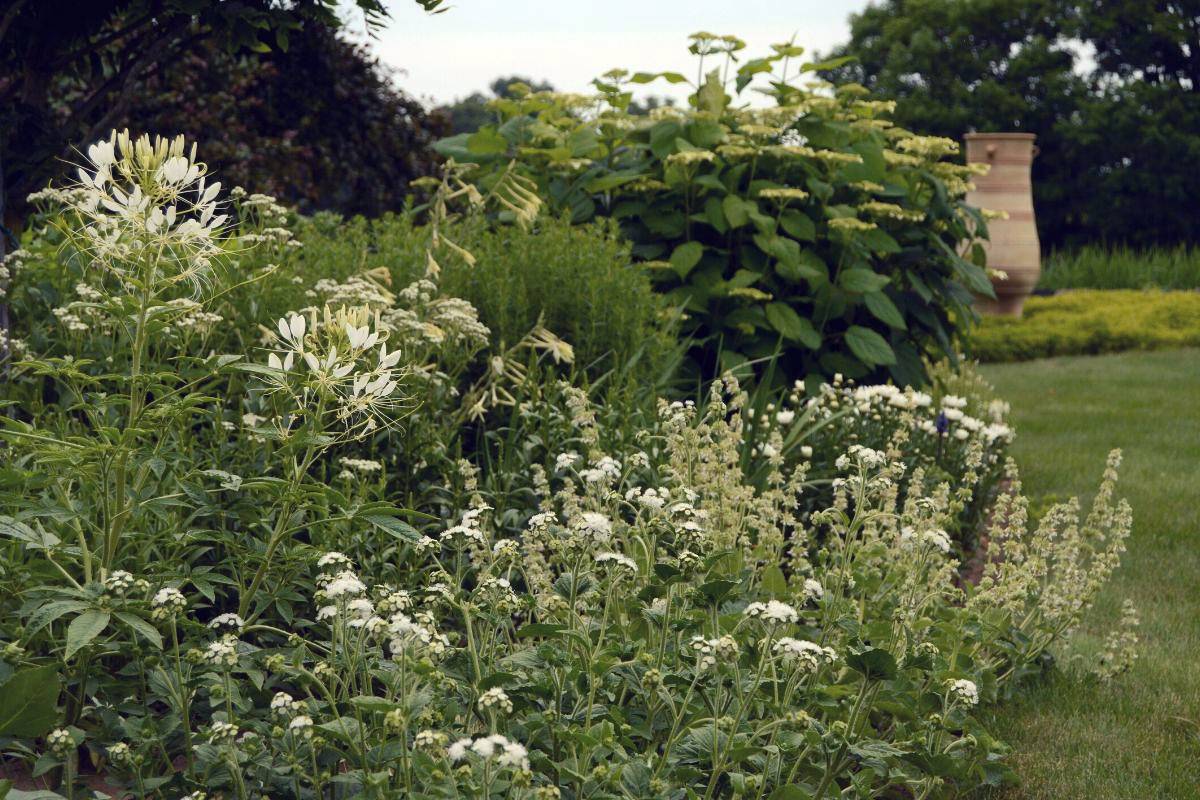 Moving farther down the border and looking back, you’ll see another handsome vignette that borrows a distant, earthen urn for a focal point. A procession of diverse forms and textures unfolds. Spidery flowers of Cleome (C. hassleriana ‘White Queen’) explode in the foreground like miniature fireworks. Beneath them, fuzzy blooms of Ageratum (A. houstonianum ‘White Bouquet’) and the cascading stems of Salvia (S. verticillata ‘White Rain’) soften the edge of the bed. Bright white blossoms of Shasta Daisy (Leucanthemum suberbum Amazing Daisies® Daisy May®) pop out against a backdrop of dark green Hydrangea foliage.

In addition to playing with multiple design elements, the White Garden demonstrates the harmonious way in which annuals, perennials, and shrubs can combine in a single space. The simplified color palette makes it easier to see how different plants can work together. 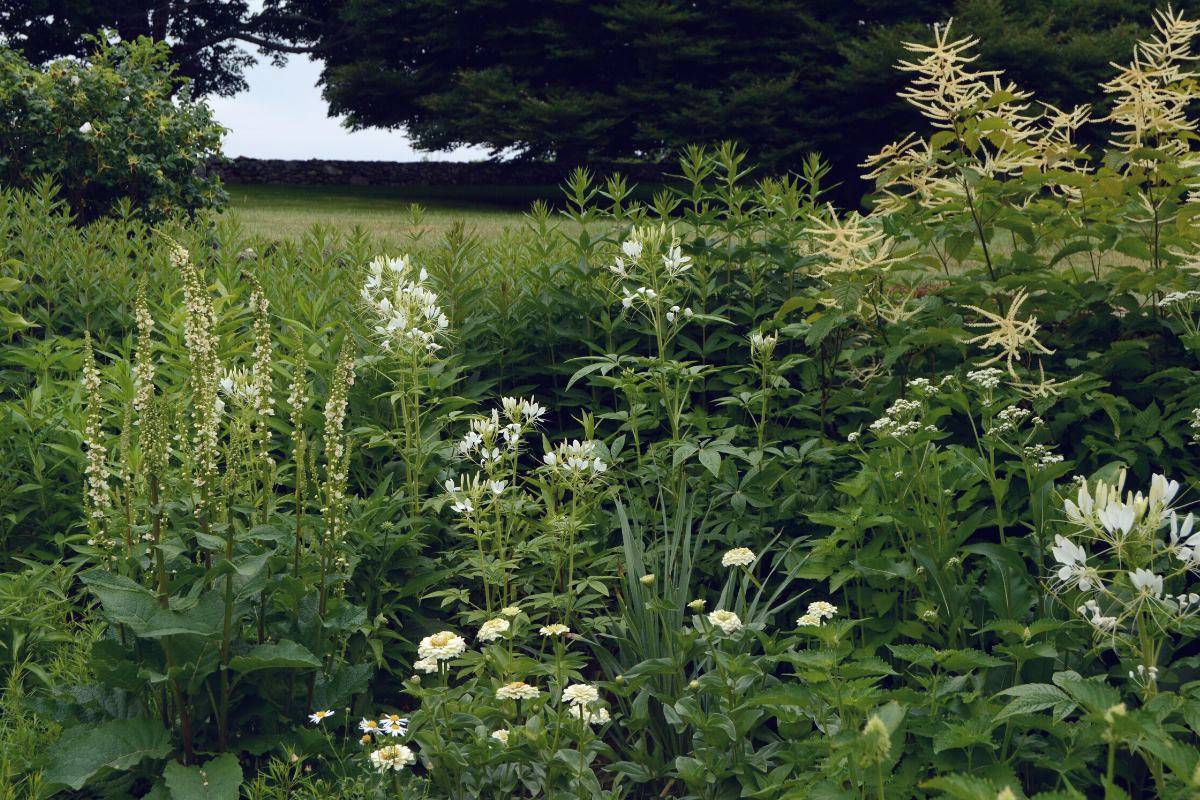 Juxtapositions of white-flowering plants lead to another interesting discovery, for there is a great diversity of color within the world of white. The pure white of Cleomes contrasts significantly with the lemon-cream flowers of Mullein (Verbascum chaixii ‘Album’) on bold, spear-like stalks. Similarly, the terminal inflorescences of Goatsbeard (Aruncus dioicus), shown in the background of the photo above, have the appearance of brown butter. Petal-packed bombs of Zinnia (Z. elegans ‘Oklahoma White’) glisten like buttermilk, while small flowers of Wild Quinine (Parthenium integrifolium) gleam like pearls.

White flowers do something else. They help you see nuances of green like never before. Clean white starbursts of Flowering Tobacco (Nicotiana sylvestris ‘Only the Lonely’) and milky blossoms of Floribunda Rose (Rosa ‘Iceberg’) direct your eyes to the supporting foliage — glowing like the zest of fresh limes, on the one hand, and subdued and darker on the other. While the fascinating white flower heads of Gas Plant (Dictamnus albus) are past, their yellow-green seedpods and glossy forest leaves help other white blooms stand out. 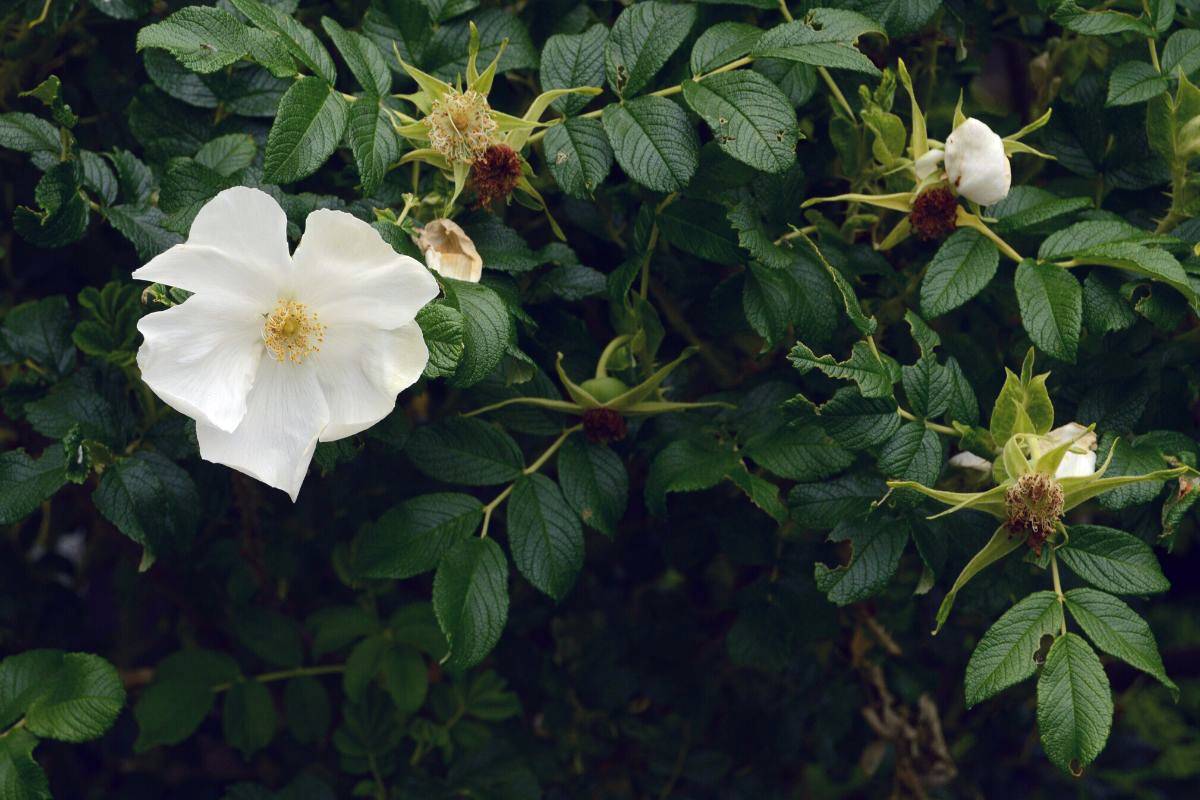 Toward the end of the border, a large Rose bush (Rosa rugosa ‘Alba’) lends some stability to the sea of stems in front of it. There, visitors may spy a single white blossom aglow with light, like a quiet firework in a sky of dark foliage. Perhaps it can serve as a symbol of the White Garden’s bold subtlety. 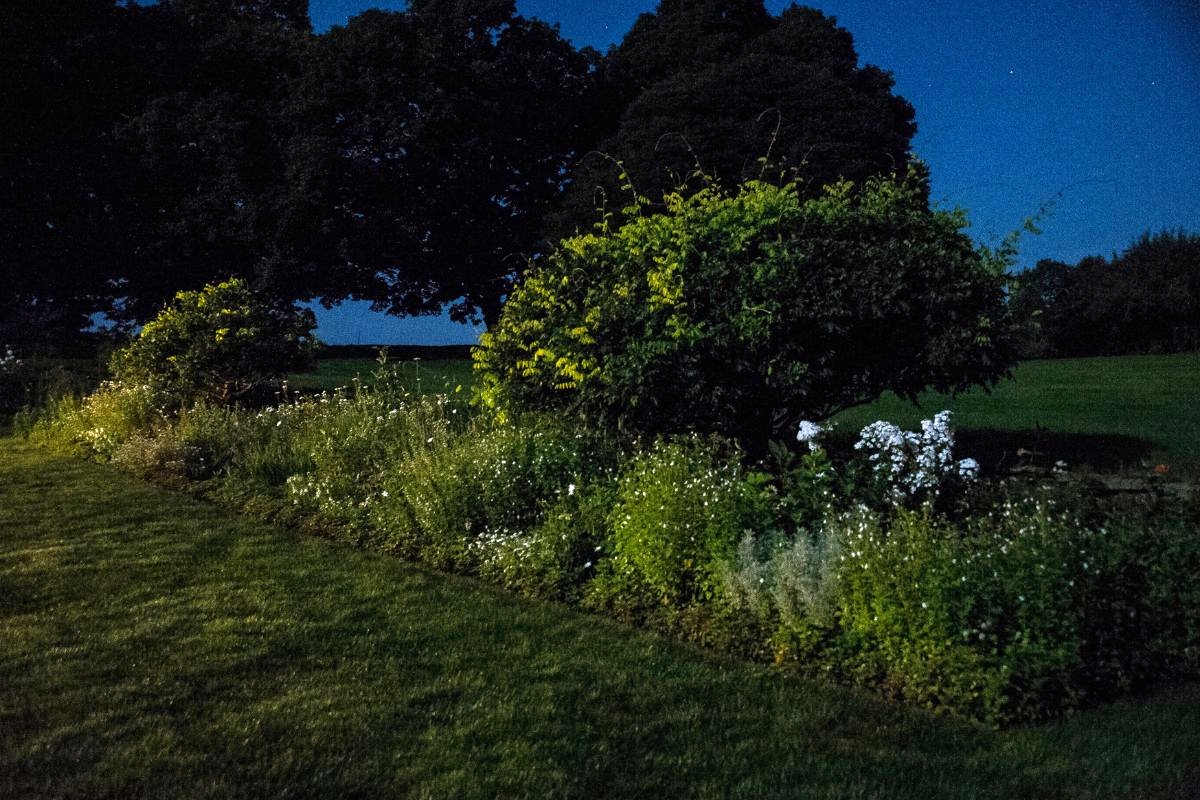 The White Garden has one other claim to fame. No other garden on the property shines as brightly on a moonlit night.