As the dog days of August grind on and the gardens seem to be steaming in the humid weather, we’re as grateful as ever for the various shade gardens we keep on the property. Set beneath the leafy canopies of mature trees or in the long shadows they cast, these lush, colorful oases provide shelter from the blistering sun, and there’s plenty to interest any gardener.

Shown in the photo above: We love the combination of Athyrium ‘Ghost’ with the dark purple iridescent leaves of Persian Shield (Strobilanthes dyerianus). Please note that the ferns need to be 2 years old to achieve the height necessary to pair them with the Persian Shield, which is planted each year as an annual in our part of the world.

At this time of year, we’re especially pleased to show off the plantings in these gardens, proof positive that shady spots need not be dull. By mixing perennials, annuals and shrubs in these low-light areas, our head gardener Cheryl Whalen and her team mix colors, forms, foliage, and patterns to create a sense of lushness and beauty.

Watering these gardens is critical, especially when plants are young and getting started. This is especially true if they’re planted inside the drip line of any tree with dense foliage. (Whenever a tree acts as a giant umbrella, preventing rainfall from getting to the plantings below, this is the condition known as “dry shade.” Few plants thrive in it, although established hostas and epimediums will manage. Others will need water.)

The photos below show a broad variety of shade garden combinations that Cheryl has created in various years. Some of the perennials or shrubs such as hydrangeas, hostas, hakonechloa grass, ligularia, rodgersia, astilbe, and ferns may stay in place, but annuals including fuchsia, impatiens, coleus, and caladiums, and smaller perennials such as heucheras may be changed out from year to year depending on what we’re trialing and what Cheryl finds appealing.

As you retreat to the shady spots in your garden, keep in mind some of these combinations for next year. 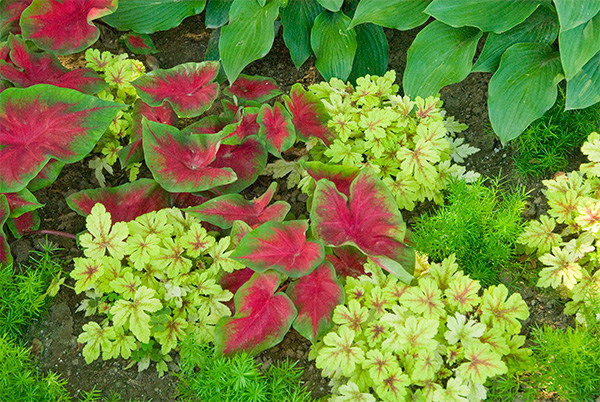 Large portions of the northeastern United States have experienced a difficult turn in which the normal weather patterns for March and April have been roughly reversed, with a series of soft, warm spring days in March followed by the recent hard frost and snow. As you probably understand, late frost after a warm spell is dangerous to plants whose metabolism has been stimulated to produce tender spring growth. The effects can be damaging to flower buds and even to roots, endangering the survival of some varieties and diminishing the bloom and fruiting of others.

There are two basic rules to minimize damage and get the garden back on track:

First, take a careful look at every corner of your garden to understand which plants are at risk. You’ll have no trouble recognizing frozen tissue, which will be either mushy or discolored. Blasted buds may have cracked, split, or simply dropped off their stems. Crowns of perennials may appear dry, or mushy, or discolored, and the new growth at the end of the stems of shrubs may be gray or brown. On woody plants, it’s easy to determine whether an individual branch is damaged by scraping back a small piece of bark to expose the underlying tissue, which will be green if that branch is alive. Hold off scraping until cold weather has passed.

Because damage is difficult to assess with precision, it is very important that this reconnaissance not involve any immediate action with one important exception. If the sequence of freezing and thawing has caused a plant to heave, meaning its roots have been lifted out of the soil and exposed to sun and air, you should immediately replace soil over the roots, gently firming the new soil and then watering it to restore moisture to the tissue. Thereafter, the best medicine is PATIENCE, not extreme measures. It may take a few days, up to a couple of weeks, of normal weather for plants to reset their clocks and start growing again. During this time, you are likely to do more harm than good by actively digging, pruning, weeding, feeding, and all the other forms of nurturing that occur logically to plant lovers.

Second, after about 10 days, serious housekeeping can begin. It will generally be possible to determine which plants have not survived and need to be replaced, which need to be cleaned up by the judicious removal of damaged tissue, and which came through without damage. You may find yourself pruning spent buds off shrubs or fruit trees, meaning a spring without flowers or fruit, and occasionally conducting last rites for longtime favorites in your gardens. Rugged individuals like Daffodils, Tulips, Peonies, Daylilies and Hostas rarely succumb (one of the many reasons they are so popular), meaning you won’t be starting from scratch.

Over many years in the difficult and changeable climate of New England, we have dealt with many of these seasonal surprises, and in every case, the disappointments were substantially offset by the opportunity to try new ideas, solutions, and inspirations. We are, of course, available to assist in every possible way, including the prompt delivery of whatever replacement plants you may need. We will be making similar replacements in our own gardens.